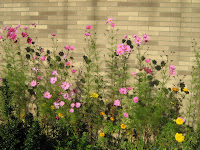 
“Moving Forward in Hope” is the name of the program Sister Carol and I attended last week in Latham, New York. This program of the National Conference for Religious Vocations (NRVC) was strategically designed for vocation and leadership personnel from congregations of religious women throughout the United States. Around our tables we began by sharing with one another what gives us hope in religious life today. As we dialogued together it became obvious that there is expectation in the air that something good is on the verge of showing itself. Someone at my table likened this moment to the song from West Side Story, “Something’s Coming”.

“Could it be? Yes it could...Something’s coming, something good….
The air is humming … and something great is coming…Who Know? It’s only just out of reach.”

“Moving Forward in Hope as Sisters of St. Joseph” is the theme of the meeting I will be attending next week in Latham, New York. Thirty women devoted to vocation and formation work within the Sisters of St. Joseph Federation will have the opportunity to dialogue with one another about the hopes we see emerging in our congregations.

Two weeks ago I wrote:
“Our Church hovers in the realm of possibility as we await the selection of a new Pope.”

Last Wednesady, white smoke over the Vatican had the air a humming as millions of people awaited with the Catholic world the emergence of someone, just out of reach. The feeling of expectation was palpable as we waited with the thousands in St. Peter’s Square the emergence of the one who has become Pope Francis. We continue to hold great expectations and prayer for this new springtime in the Church.

We invite one another to dialogue about religious life emerging in this new environment. Our world is moving forward and spring is in the air. It is a time for nurturing and tending the new that is still in the realm of expectation. I choose to link all of the above reflections with a picture.

“Spring Dialogue” is the title of a print by one of our dear sister artists, Marion Honors, who has her studio on the campus of the Sisters of St. Joseph in Latham. It depicts a woman planting a seedling. I perceive the soil to be religious life and those who live it faithfully in today’s world. The woman represents those who hope in the future of religious life. The plants are those called to be the future of religious life.
Marion speaks of her Spring Dialogue in this way:

“It is planting time and the woman encourages her seedlings to be strong and courageous, and she asks the soil to be welcoming, as she promises them her vigilance for foes and harsh weather as well as an appreciative eye for their beauty.”

As we enter this season of Holy Week and begin preparing our seedlings may we feel the hope that springs eternal. Please share the signs of hope you see.
Posted by Sr. Natalie Cain at 6:54 PM No comments: